Did you read about how to set up a local server environment, or do you already know how to do that? The next step is setting up virtual hosts. I've found most - if not all - of the resources and tutorials about setting up virtual hosts to be lacking. I'm going to set it up for the first time on the laptop I'm on, so I'll be able to guarantee every step.

At this point, MAMP is set up, and going to http://localhost:8888 will take you to the document root you set.

In Finder, go to Applications > MAMP > conf > apache > httpd.conf and open the file with your text editor.

Uncomment the code by removing the hash symbol.

In File Explorer, go to C:/ > MAMP > conf > apache > httpd.conf and open the file with your text editor.

Find this line in that same httpd.conf file.

You're going to change None to All.

First of all, open MAMP, and ensure the document root is Applications > MAMP > htdocs. This is the default, but if you've been using localhost, you may have moved it.

Change the DocumentRoot to wherever your PHP project is located. This is my path, but yours will of course be different.

As of 2017, Chrome no longer allows .dev domain endings for local websites. Consider using .test instead.

Make sure to restart the servers on MAMP after making any changes! If you don't reset the server to apply the changes, nothing will work even though you know you've done everything right. Trust me, I've done that too many times.

Allow your computer to recognize your local domain

Open the Terminal application. It doesn't matter if you don't know how to use Terminal or the command line; you only need to follow strict commands right now. (However, please read this guide when you decide to learn it!)

Type this in Terminal.

You will be prompted for your password. Then a scary screen will come up that looks like this.

You are actually editing a text based file. At this point, I'm just going to keep pressing the down arrow until I reach the end of the list. At the next line, I will type my new server name after 127.0.0.1, which is the computer's local address.

If Notepad is open, close out of it. This time right click on Notepad and select "Open as Administrator". Open this file in Notepad:

At the bottom of the file, type the name of your virtual host.

At this point, the Window's installation of Virtual Hosts is complete! Go to example.dev in your browser. Make an index.php file with the contents <?php echo 'Hello, world!' ?> and place it in the directory to test.

Almost done! After restarting your MAMP server, you can go to http://example.dev:8888 and it will take you to your path.

That's pretty good. But, I want to make this perfect. I want to remove the :8888 from the end of the URL.

Back in the httpd.conf file, find these two instances (they won't be next to each other):

And change them to this: 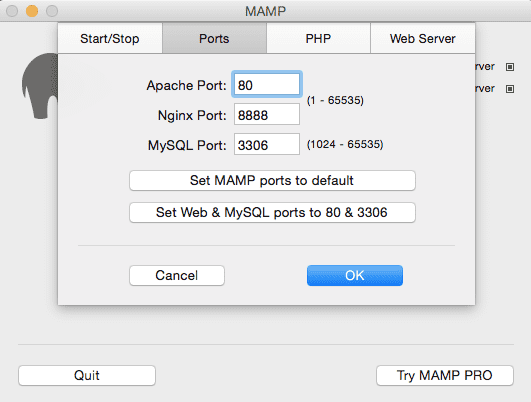 Restart your servers and try http://example.dev in your browser. 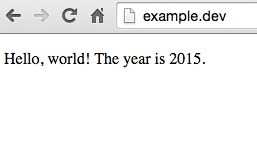 And now it works! You can repeat the code as many times as you want, for as many virtual hosts as you want.

If the above example doesn't work, try removing :80 from the VirtualHosts tag, as this seemed to fix the problem for anyone having an issue.